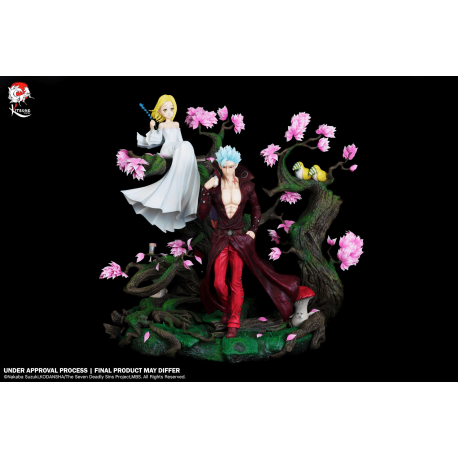 By buying this product you can collect up to 109 loyalty points. Your cart will total 109 points that can be converted into a voucher of 10,90 €.

Ban, the fox of greed, is accompanied here by his beloved, Elaine, former guardian of the Fountain of Youth and sister of King. Ban, melancholy about his return to the Forest of the Fairy King, moves forward with a determined step to keep the sacred tree alive and fulfill his promise.
The two characters are represented in the Forest of the Fairy King, a nostalgic place of an encounter that brought them together by an unwavering and unshakeable love. The statue, in 1/6 size, presents many winks such as the Matango mushrooms, the birds living in this forest, its sacred stolen treasure "Courechouse", the book of wines or the fountain of youth.
Ban is known mainly for his dangerous, reckless and deathless behavior. Despite his constant cynicism, he worries about his comrades and does not hesitate to put his life at stake to defend them.
Thanks to this statue, we were able to show this other side of Ban, a man who lives above all for the one he loves and whose only goal is to make her live again.
A fearless man, violent when he fights, immortal but above all, in love!
We hope that you will like our choice and that it will inspire as many emotions as we had to conceive this project.
"A true sin is something you cannot atone for."