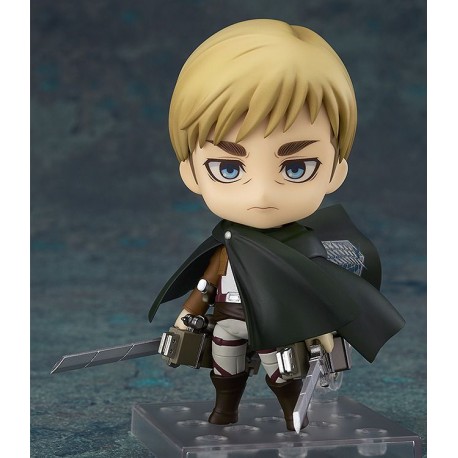 By buying this product you can collect up to 10 loyalty points. Your cart will total 10 points that can be converted into a voucher of 1,00 €.

From the anime series 'Attack on Titan' comes a rerelease of the Nendoroid of the commander of the Survey Corps, Erwin Smith! He comes with three face plates including a standard face, a shouting face as well as a smiling face. Just like the previous Nendoroids in the series he comes complete with his Vertical Maneuvering Equipment, dual blades and effect parts to display him soaring through the air, which allow for amazing combat scenes. Erwin also comes with his Survey Corps cape similar to Nendoroid Levi, as well as an alternate front hair part to display him with his hair loose. Be sure to display Commander Erwin with the other Attack on Titan Nendoroids to bring out the atmosphere of the series in Nendoroid size!